This is The Horrifying Stories Of Hitler’s Cruellest of Experiments Hitler horrifying stories – World War 2 had a grim reality and the anecdotes of human sufferings still scare us out of our wits. Hitler was the main kingpin of World War 2 and the manifestation of his deplorable ideas has created ripples in the world over.

Hitler and his Nazis killed thousands of people hastily and remorselessly.

They also stopped at nothing to put the Jewish people through fated sufferings. Which looked rather heroic to people was actually a swamp that pulled civilizations down faster. No one can hence dare deny that it was the darkest period of history where thousands of prisoners died for Nazi experiments. But, there are some facts that are still secreted from human knowledge and you perhaps hence didn’t know that being a blond-haired, blue-eyed baby in Central Europe, which otherwise looked visually appealing, was a downright curse at the stint of Hitler’s tyranny. Sadly, the babies attracted the attention of Heinrich Himmler, the psychopath head of the German SS, who were snatched away from their mother’s arms as soon as they came in sight.

Himmler was obsessed with ‘Purity’ which stemmed when he reportedly conducted experiments in breeding ‘Pure white’  chickens at his poultry farm. It didn’t seem anything out of the box then but it seeded the cruellest plans of his. 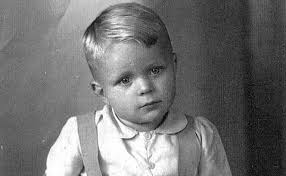 There are people that Himmler considered ‘Impure’ and the list comprised of Jews, Gypsys, Homosexuals and Blacks) whose lives have been severed in the Hitler’s death camps, so as to breed a genetically-superior breed to swarm the world. They hence devised a programme which was called ‘Lebensborn’ (Fount of Life) which was rather a veiled breeding plan to feed fat the future of thousand-year Reich. It happened in the year 1935.

Hitler got great lengths to justify his misdeeds and backed it with the ideology borrowed from Darwinian Science, that was:

““The stronger must dominate and not mate with the weaker, which would signify the sacrifice of its own higher nature. Only the born weakling can look upon this principle as cruel, and if he does so it is merely because he is of a feebler nature and narrower mind; for if such a law did not direct the process of evolution then the higher development of organic life would not be conceivable at all.” The goriest of events happened in the special ‘breeding clinics’ where pure German SS officers were given to mate with suitable women in the strategic places where people were born with blonde hair and blue eyes. They further justified this saying that they weren’t committing adultery, but carrying out the orders from Hitler.

The women were even compensated with money to breed ‘Aryan’ children.

Some of them women readily accepted this proposal to survive in a war-torn, poor state of being, however the disturbing fact was that the children, as soon as they born were slated to become the property of the state. The mother could hold their children for only two weeks and after that they would not see them in their lives again. Nevertheless, the children were very beautiful, tall and with blue eyes, not to mention, blonde hair too.

The women were given to hobnob with the SS officers and the state entitled them to choose their respective mates too. When the babies were born, they were Christened in a ritual with a naked dagger held over their head whilst the mother pledged allegiance to the Nazi ideology.