Off-beat places in Delhi – Mughal architecture, colonial monuments, street food, street shopping, summer heat, winter chill, you probably know about all of them if you have already explored our capital city – Delhi.

But there is a lot more you don’t know about this city that attracts more than 1000 tourists a day.

Here are some Off-beat places in Delhi – things you can do off the beaten path in Delhi.

The Mughal era has left a lot of its gems behind; among these are various Dargahs around Delhi that host qawwali nights at least once a week. The Dargah of Nizamuddin Aulia is the best place to experience soul stirring Sufi experience. But it is not the only one. Dargah of Bakhtiyar Kaki, Ashiq Allah Dargah in Mehrauli, and Chiragh Dilli near Greater Kailash also conduct qawwali nights. All these shrines have interesting myths and anecdotes associated with them. On The Haunted Trail

The forests of Delhi hide several haunted stories. If you have a heart of a daredevil, visit these places to test your adrenaline. If you are not, go still, because these stories are probably just that – stories. The most interesting of these are the stories surrounding Jamali Kamali Mosque and Tomb in Mehrauli Archeological Complex. Named after a great Sufi saint and poet, Shaikh Jamali Kamboh, the mosque has two toms – of the poet and his best aide Kamali. People who visit have reported being slapped and pushed by invisible force. Unusual howling of animals, raging fights and laughing women have also been reported. Entry at night is not allowed, however if you insist, Archeological Survey of India might let you have your adventure. You can also visit the Sanjay Van, squeezed between Vasant Kunj and Mehrauli, for a haunted experience. DDA’s efforts to make an ecological park in this forest zone were thwarted after locals reported presence of a woman in a white sari swinging on an old Peepul tree. If you are a nature lover, Delhi has a lot to offer you. There are several conservation areas in and around Delhi that are home to different species of birds. The best and little known of them is the Okhla Bird Sanctuary. Located at a juncture bewteen Delhi and its satellite city of Noida, this wetland habitat also features a vast reservoir of migratory birds. October to March is the best time to visit here. Birds like Northern Shovelers, Flamingos, Eurasian Widgeons and Bar-headed geese migrate to this sactuary in winters.

This is not be missed at any cost if you are a photography enthusiast. This lights market, held in a lane adjacent to Bhagirath Palace, houses a market full of beautiful, sparkling lights. Visit it after sundwn to capture the grandeur as the chandeliers and mashaals twinkle. The area surrounding this market is congested due to encroachment. This little known historical gem is nestled quietly midst the hustle and bustle of Connaught Place in Delhi. Localted in a narrow lane off Hailey Road, you might just even miss it while driving by. This historical step well is a sight to behold. It’s a welcome refuge and an ideal place to spend some quite moment away from the crowd in the heart of Delhi city. If the land doesn’t suit you anymore, take a ride up the heavens on a hot air balloon in Delhi. There are several hot-air ballooning companies run by various adventure tour companies in and around Delhi. The most popular destinations for this adventure are Damdama Lake, Neemrana, Sohna, Gurgaon and Greater Noida. Typically early morning flights take off between September to March, when the weather is perfect and wind conditions stable. 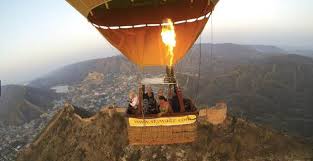 Is this the end of list? Of course Not! Delhi has places to explore beyond the typical Red Fort, Qutub Minar, Lutyen’s Delhi and Chandni Chowk. There are many interesting places in the capital that are not mentioned by your guide books.

Off-beat places in Delhi – If you have already exhausted your list of places to see in Delhi, try these for a different experience of the city!