Hilarious Ways How Guys Fight and How Girls Fight Guys and girls fight – By a long chalk, it has been understood that guys make better friends than girls who thrive around jealousy at chip away at each other’s reputation at the every given time.

It is partially true because girls make good friends to each other too until they become sworn enemies, everything comes to an impasse when their enmity starts and they make use of every opportune moment to bring each other down. While girls are more into cold war and bitch fights happen only at the saturation level, guys boil down to hand-to-hand combat also when they pick up a brawl.

However, there are mental wars too that the Guys and girls fight and here are the hilarious ways how they both fight:

What a cheap dress:

A girl would bring another girl down by passing comment on her dress. That is the easiest way to demean her in public and a revengeful girl will not let go of that opportune moment. In social media too, they won’t back off from commenting on each other’s outfits and bullying each other’s fashion sense. You are such a copy-cat:

Well, girls do copy each other but never admit it. When one girl is copying the other in terms of her dress sense, the girl who is being copied will certainly not enjoy because she always wants to stand out. So the latter kind will take jibes at the former kind and call her a copy-cat. Worse, they can also hurl abuses like ‘What a bitch!’ beat that! Girls are judgmental AF! And they will put each other’s social media accounts under the scanner to find out how many guys have commented on their profiles and what sort of comments at that. On that basis, girls will determine the slut-level of the other girl and provided the opportunity, they will slut-shame each other in public. 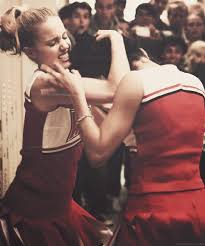 Guys will indulge more in nasty verbal combat. They will brag about their respective successful careers and pricey shirt while fighting only to end up realizing that that was downright stupid. However, it doesn’t take long for the ice to melt and the guys that were at loggerheads a minute back will extend help for each other or set example of brotherhood by saying ‘chhor na yaar’ 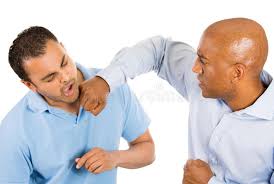 You stole my girl:

Suppose a guy has been holding a torch for a girl for quite some time and deployed his friend as a messenger. To his worst nightmare, the messenger becomes the lover boy and steals the girl only to leave the first guy in murderous rage. When they meet, you are sure to witness a fight as same as the Spanish bull fight which is really hilarious. 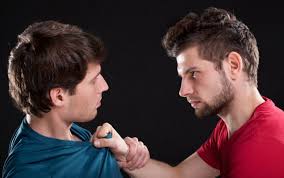 These are the ways Guys and girls fight – So, in a ratio, it seems guys are more friendly than girls when it comes to co-existence. Girls can’t tolerate each other for the above given reasons. No wonder they say that a woman is another woman’s greatest enemy.