She doesn’t know Hindi, but her powerful and melodious rendition of Hindi songs helped 10-year-old Anjana Padmanabhan win the audiences’ hearts, and thus, the first “Indian Idol Junior” title at the star-studded grand finale of the singing reality show on Sunday. 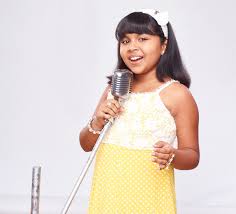 For the finale, the Bangalore-based Anjana competed with three other finalists – Nirvesh Sudhanshubhai Dave, Debanjana Karmakar and Anmol Jaswal. The talented young girl was ecstatic upon receiving the trophy from megastar Amitabh Bachchan, and much to everyone’s delight, she made a short acceptance speech in Hindi.

“Maine yeh expect nahin kiya thha. Main bahut khush hun (I didn’t expect this. I am very happy),” she said after being adjudged the winner based on audience voting.

As the ‘Indian Idol Junior’, she went back home with a trophy, a cash prize of Rs.25 lakh and a Nissan Micra car. She was also gifted cheques of Rs.500,000 and Rs.200,000 from Kotak Mahindra and Horlicks, respectively.

Judged by singer Shreya Ghoshal, and music composer duo Vishal Dadlani and Shekhar Ravjiani, the Sony Entertainment Television show was hosted by Karan Wahi and Mandira Bedi. It went on air on the first of June.

The finale lived upto its buzz as Amitabh even sang “Mere sath aao mere doston” with Shekhar and the four finalists.

Shahid Kapoor too made an appearance on the show to promote his upcoming film “Phata Poster Nikla Hero”. The actor also took to the stage with Vishal to perform their hit track “Dhan te nan” from “Kaminey”. He later danced to the beats of “Dhating naach” from his upcoming movie with “Indian Idol Junior” contenders.

“Zanjeer” stars Priyanka Chopra and Ram Charan Teja also made a roaring presence on the show. They entered while grooving to the beats of “Akhi Mumbai humko salam thokti dekho” from their forthcoming film.

Priyanka even performed a Bihu dance on “Daiya re daiya” on the behest of two participants of the show – Priyam Borpatra and Eman Chaudhary. The actress even requested the final four to sing for her – and they chose to croon her tracks “Gun gun guna re” and “Desi girl”.

Apart from performances by the top four contestants and celebrity guests, the judges also put up an energetic show. All remaining contestants, who were in the top 11, also got a chance to showcase their talent once again.

Shreya lured the audience with her song “Sun raha hai na tu” from “Aashiqui 2” and “Itni si hansi” from Barfi, Vishal-Shekhar accompanied her for “Radha” and “Ooh la la”. The music composer duo also belted out some of their hit numbers including “Disco deewane” and “One two three four”.

The final performance was of the top four contestants who paid a tribute to Amitabh by singing some of his hit numbers, including “Yeh mera dil”, ” Ab toh hai tumse”, “Dekha na haye re”.

At the finale, an announcement of an Indian Idol Academy, which will impart musical training to children, was also made.