Yoga isn’t religion; it is a way to trace the path to leading a healthy and peaceful life. To develop discipline in life it becomes essential for the body to have discipline but religiously. A disciplined body is a home of fitness and a way to rejuvenate lifestyle. It is not an easy task for a person to grow a body that can perform religiously. Some can maintain it as a habit while some as a necessity to keep the body away from mental and physical complexes.

Only a few are found to look forward to having an attitude to develop the mind for a disciplined body with Yoga. Yoga is a traditional practice that still survives in modern times. There has been a great rise in technology and science. But the recognition of spirituality, its necessity is similar to it was 5000 years ago. There are no signs of Yoga practices diminishing. The ancient practice of spirituality has been described in four ways. They are:

The practices with an effort that a person puts to gain the goal are termed as Abhyasa. Abhyasa helps in excelling and achieving the goal but it is necessary to improve with consistency. Yoga is not a religion but its regular practices will keep your achievement closer. It includes developing the mind and body to emerge with excellence.

One of the most complicated practices of Yoga to bring the mind and body into discipline is Vairagya. Mostly, Vairagya is not bound to follow any religion, which already proves that Yoga isn’t religion. This practice ensures the body detaches, surrenders along with practicing to control the mind from extreme desires and preferences.

It is a practice in which the body has to undergo different difficult obstacles. This wear and tear of life enable a person to understand the differences. Apart from it, a person develops the capability to differ and say “Yes” or “No”. Tapasya builds concentration, determination and stabilizes the position.

This is the position and place when people like to spend the most. It enables to develop the self-control and self-discipline. For those who misunderstand ashrama to be the place to learn religion. They should know that Ashrama teaches the mind to develop strength and peace for both body and mind. 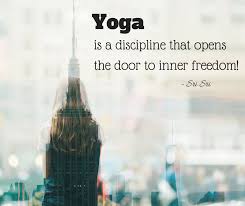 Survive beyond controls and binding

Yoga isn’t a religion, but its popularity is widespread worldwide. On practicing yoga religiously enables to develop strength as well as develop thinking ability. Slowly pushing a person away from worldly unwanted desires, as they learn to survive beyond worldly desires.

A yogi’s mind does not flow with materialistic amenities. They can control themselves and bind their limits. Somewhere it enables to reach the hike of spirituality as well as make an end to jealousy and harmful strategies.

Reduce the ill feelings of inferiority, when their exists no desire and controls. It was a time when Yoga was limiting to priests and yogi but detaching it from religion it is spirituality for individuals. As less people were aware that Yoga isn’t religion!