People who are opposed to homosexuality constantly cite it as being a choice, despite all the evidences suggest the opposite. But they left it unexplained why they think that a person would make this choice? Going against the tide? To seek attention or he is a plain idiot?

Psychologists have by far found out that people get really nervous when asked about it. Sometimes, it was comprehended that as a paranoia and many other undercurrent reasons were sniffed at play behind this. People, who find interest in decoding the mindset of homosexual people, found out that they go through a neurological fear of being misunderstood or cornered if they came out of the closet. Well, this is not a superpower to be gay, this is very normal and it’s time people understood this. However, people will still react and will always have to say something and here under the funny ways people react when they cross path with a homosexual couple.

In the name of Christ:

They will bring references from the Holy Bible that it is against God to perform abortion or homosexuality. It is ‘abnormal’ and god will single out you as a sinner. Think again, if homosexuality was at all abnormal and God had a disdain for it, wouldn’t he wipe it out from the world once and for all? Who do you think you are? A godsent angel to do that on his behalf? Duh. An animal’s behaviour to queers is equal, how?

Well, little does it knows about your separatist ideologies against queers, all it knows that the person standing their patting it is its master and its hooman! He will shower him with the equal affection as he would do to any ‘normal’ master and there the dog becomes more human than other humans. Queer is illegal, for god’s sake:

Wife-swapping is legal? Whoring around too is but being in love with person from same sex is illegal which is beyond our ability to understand. If a gay or lesbian couple tells you they have been committed to each other for so and so years, they will be scoffed at. Sadly, even the government is not solicitous. Their gender will be at question:

They Queer people have a different body language and of course, as valid citizens they too have the agency to make the choice how to dress up or behave. Raising a question on their gender is cantankerous, especially poking fun of them is inhuman. When will people understand this? So, you have a Queer Spider man too?

The only badass comeback to this question is, your sense of humour is worse than Crime master Gogo, Spider man is way out of your league. 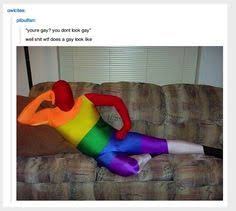 So, your favourite movie has to be Broke Back Mountain: 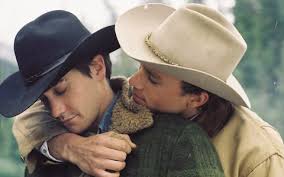 All because the whole world is imbued with this ideology, Queer people fear to bare their truth and end up having trust-issues. No one likes to be mocked at and coming out becomes exhausting.