Changes in thoughts to bring a change in the lives of the people were seen during the period of British India, The Literary period.  Leaders, Nationalists, and activists from this period has given strength, traced path for encouraging new thoughts. Societies were built with culture and religion, it is a reason the Indian renaissance had to grow emerging against existed society. Changes and revolution both were simultaneously developing with the complex minds of the leaders. To think about the benefits and well beings, another hand to get rid of the orthodox-filled religion the nationalists and leaders played a great role.

Decline in culture and the human spirit

The decline in culture was severe when people were congested with inhuman behaviors. They were lacking in spiritual hikes and blind in worshipping idols. People were less confined to helping the society, its people and trying to acquire spirituality through offerings to the stone-made idols. Killing animals in the name of sacrifices and offerings to God was a part of their religion and culture.

It was the time when poverty in India was at its extreme. Poor people were suffering lacking food and shelter. As a result they found out fastest ways to survive, it was the time when in the 19th century when Indian villages and towns did hardly eradicate poverty. What was wrong

Poverty was another reason that people could not find ways to improve and relearn about spiritual thought and implementation. Swami Vivekananda, who is a follower of Rama Krishna was one of the Indian Renaissance leaders to seek changes in human spirits.

Education was not at all for everyone, it is in the 19th century when a major renaissance took place. Poverty was the main reason that had surfaced the different classes and status of people to stay away from gaining knowledge. Child marriages and sati pratha are the two main reforms that took place. The renaissance was accomplished by the popular leaders of bengal, initiated by Raja Ram Mohan Roy. He is known as the Father of Renaissance. Indian renaissance period started from bengal. 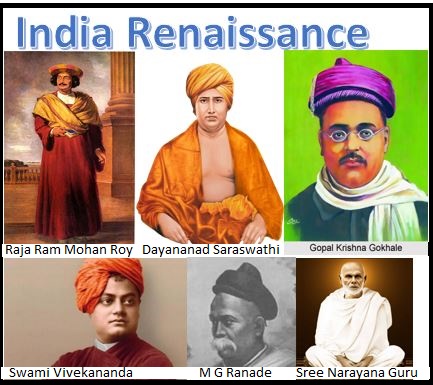 Sati Pratha, women were burned alive to their husband pyre. An inhuman behavior towards the widows, who were thrown to the fire as a symbol of commitment and courage. Relatively the child marriage was another harmful social trauma. It acted as a fuel to the decline in society. Poor underage girls were married to old and rich one, interms that they will live a better life. It brought hell to the lives of the young girls. In 1829, the Sati Pratha was abolished a

Political thoughts and reforms among leaders

Indian Renaissance was experienced in Political thoughts and reforms that reached a peak engaging to develop reforms. It was during this period when people national leader fought for equality. Overcome from the bindance of religion and unite to figth for freedom. Raja Ram Mohan Roy who fought for the civil rights opposing against the superior behavior towards British and Europeans.

Reformation took place with the develop of Brahma Samaj there was several developments in thought and execution towards nature.