Indian Hip-Hop Dancing Crews have included a desi style to the street dance maintaining the rule and basic forms of the dances. Top hip hop performers as the world top participants crews:

A crew of boys with a keen passion for Hip Hop dancing, from Mumbai, India participated and won the world dance championship held in Los Angeles, 2015. You can easily recognize them from the shows in “So you think you can dance” and “ Step Up”.

Seven members of the crew who was invited in 2017 to show their performances in the world dance championship. Top hip hop dancers of the Desi boys with genres in Krumping, Bollywood. The best part of the crew is the “Street Nation” workshop indulging Indian cultural elements in “Street shows” The genre with Hip Hop also from Mumbai includes desi Indian form to the Hip Hop style, innovative and entertaining. They started their career with small stage shows and finally were on a bang once they won India’s Biggest Hip Hop Dance Festival Breezer Vivid Shuffle judged by The Kinjaz also w/DIVINE on the second place.

The uniqueness in the Desi Indian style that the crew provides to the western Hip Hop form of dance. The gang started their group in the year 2015 with the intention to flourish in Indian street dance form the “ Desi Hip Hop”. Best coordination found in the group with energetic performance no less like other Indian hip hop crews. The name itself “I AM HIP HOP CREW” defines the style of the crew it follows, apart from hip hop they perform locking, popping, house, urban and never the less Bollywood style too.

Winner of the Gold medalist at the Indian Hip Hop dance championship in the year 2014. Performing since years captured the attention of the audiences after winning the gold medal in Hip Hop style. 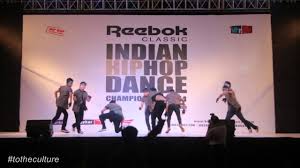 World top performer in the Hip Hop dance style who started the journey to perform as dancers and building their career on dance in the year 2007. These are Hip-Hop Dancing Crews – The crews from India have influenced the world audiences through their best synchronized and energetic performances. Desi or Nativity added a flavour to the Indian hip-hop styles.