Things Happen When You Start Dating A Foreigner Dating a foreigner – There is a pattern of dating, you have a mental image of the potential partner and try tooth and nail to match that criterion.

Take for instance, if a guy had dated elder women in the past, he will grow fond of that idea and won’t settle for younger ones citing they lack maturity. In likely manner, if you date a man from apparently a way more liberated country who goes easy on things that are deemed taboos in our society, you are ought to grow a fondness towards dating foreigners in succession.

The mamma’s boy, couch potato Indian guys don’t seem like your cup of tea anymore and here are the things happen when you take the plunge:

His accent is always commented on:

We have survived many NRIs coming back with a fake accent, of course we are not hinting at theirs. But, a foreigner who has an accent by default is rather sexy. It attracts good comments from your peeps, sometimes side-eyed. Either way, he stays in the middle of attention. His family events are your nightmare:

Of course, you don’t understand what is going on anything that seems to induce laughter among them, goes tangent your head, that’s really taxing. People will criticise about your relationship:

The cornerstone of successful relationship with a foreigner is patience. There will be people who will criticise your relationship and think this is about the ‘green card’. Strangers like to think that you want to settle in New York which is definitely not the case always. It’s all for love and not many people would understand that. You get a lesson in another culture, very elaborately at that:

Learning about different cultures and marrying into that culture is a different thing altogether. It’s a mutual learning about each other’s cultures.

You will have to defend your bonding:

There will be people from both your partner’s and your family who will think your relationship will eventually break so you will have to be your mainstay all the time. Your family will always be of the belief you are changing faith:

In India, we were taught to nurture religious tolerance. We grew up celebrating Eid, Christmas alongside Diwali but converting into another religion after marriage is what our parents will be completely repelled to. But then, it’s our call whether or not we will do that since we are adults. You will adopt some of their lingo:

Which is obvious if you are in a happy relationship. 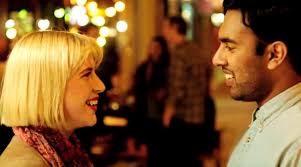