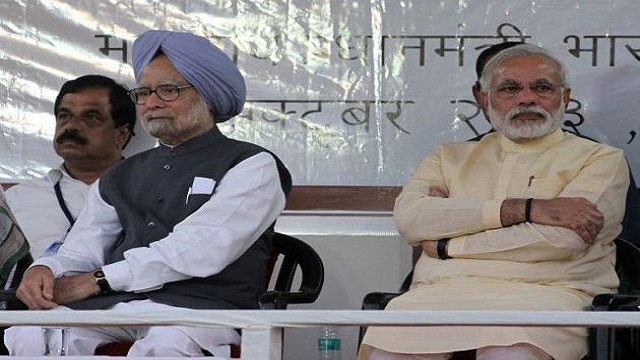 Sharing the stage with the prime minister at a function here, Modi spoke first and said that India would have been beter off if Patel had ruled the country after independence.

“I wish Sardar Patel had become the first prime minister of India,” Modi said at the inaguruation of a museum dedicated to Sardar Patel. “This will remain our regret.”

Modi’s comments mirrored long-held views of the Bharatiya Janata Party and its affiliates which adore Sardar Patel but have no love for the socialist-minded Jawaharlal Nehru, who ruled India for 17 long years, from August 1947 until his death in May 1964. Sardar Patel died in 1950.

Speaking soon after Modi, the prime minister, the chief guest on the occasion, recalled Patel’s association with the Congress and his love for secular values.

“I am proud and happy about the fact that I belong to a political party to which Sardar Patel was attached,” he said, at a clear dig at Modi.

He went on to point out that Sardar Patel was a “secular man” who always worked to strengthen the Congress.

“Sardar Patel was totally secular. He believed in the unity of India. All his life he worked to strengthen the Congress.

“It will not be wrong to say that he (Sardar Patel) has a great contribution in laying the foundation stone of the united India the world sees today.

“Throughout his life, he worked to strengthen the Congress party,” the prime minister added.

The event here was organised by the Sardar Vallabhbhai Patel Memorial Society. Gujarat Governor Kamla Beniwal and central Minister of State for Mines Dinsha Patel, who heads the society, were also present.

Modi’s remarks ignited sharp reactions from the Congress and the Communist Party of India-Maxist (CPI-M).

Commerce Minister Anand Sharma, who has refused to attend Thursday’s event in Gujarat to unveil a gigantic statue of Sardar Patel, said: “If alive, Sardar Patel would have been the first person to reprimand Narendra Modi.”

Modi had invited Sharma for the inauguration of the “Statue of Unity”, which the Gujarat chief minister has declared would be the tallest statue in the world.

CPI-M leader Sitaram Yechury also pointed out that there was nothing common between the values of the late Sardar Patel and Modi.

“The original legacy of Sardar Patel is that he banned the RSS,” he said. “Narendra Modi should understand what Sardar Patel did and meant.”

The Congress has been hitting out at Modi after his reported comment that Sardar Patel’s 1950 funeral was not attended by Nehru. Modi tweeted Tuesday that he was misquoted.

He said Sardar Patel had in a letter in 1948 linked the assassination of Mahatma Gandhi in January that year to the communal politics of the BJP’s ideological mentor, the Rashtriya Swayamsewak Sangh (RSS).

“I want to ask the BJP or their newly anointed pretender – do they endorse or agree with the views of Sardar Patel with regard to the RSS?”