Why The Spotted Lake Of Canada Is The Strangest For Adventure Lover? The spotted lake of Canada is one of the strangest creations that is the favorite of travel and adventure lovers. Located in the Similkameen Valley of Canada. It is a lake without any outflow water from different rivers and lakes that pass into this drainage basin. But it does not have any exit. It is a reason that the water collected in the lake with sediments of rich minerals.

In hot summer when the water dries up, the sediments that collect form circular spots like pits. This spotted view gives a serene gesture of nature. Travelers in different parts of the country visit to watch the spots in the lake. The spotted lake is considered the sacred lead for the native tribes. They use the minerals that are available from the pits to treat different diseases. According to them, it is a sacred lake that can treat diseases related to skin. It also has the ability to cure illness.

The belief in the sacred Lake has been for centuries. When minerals for used for healing and curing by the indigenous people. Okanagan is one of the indigenous tribes that use different minerals to treat diseases. It is also known as the sacred medicine lake called the Chliluk.

Although it is a protected area that is owned by the Canadian government was once used for the production of explosives. It is here the importance and the quality of the minerals elected as sediments can be realized. The minerals of the spotted Lake Canada were extracted during World War I. The collection is of calcium magnesium sulfate and sodium including other minerals that are useful in the preparation of explosives. This played an important role to manufacture weapons during the world war.

The beautiful creation in colors that were from the water sediments with the presence of the contents in it. Watching the colorful beams itself treat the eyes of adventure lovers. 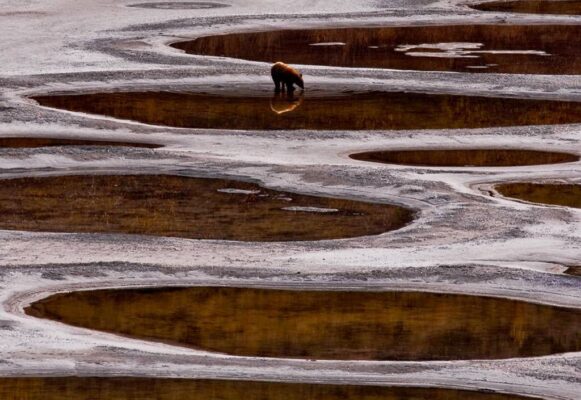 During the winters and rainy season, the lake is covered with water. The waters covered the colorful pits which can be clearly visible during the summer. It is after the sun overhead evaporates the water. Forming the pits of hundreds in numbers the colorful water lake spots are amazing at every glance. Specifically when the minerals turn into crystals through which beams of the light pass to give different colors.

The “sacred medicine lake” is a belief of boon and blessings to the native and indigenous tribes. On another hand, it was used for explosives, which describes the requirement of the Spotted Lake. The soothing view of the lake invites visitors. But if they want to take a dip in the colorful water, then it disappoints them in summer. As the sediments of the minerals are all present but have no water. So swimming in the Spotted Lake is not possible. All the adventure lovers can do is enjoy the beauty of nature from far. Therefore Evaluate the presence of the eight minerals in the Spotted Lake.