The wedding of Iran is a lucrative Persian wedding with fascinating rituals for the brides and grooms. Persian traditions have always been a focus for its luxurious culture and lifestyle. Maintaining the exact phases of their traditions and customs Persian marriages are still a great celebration. 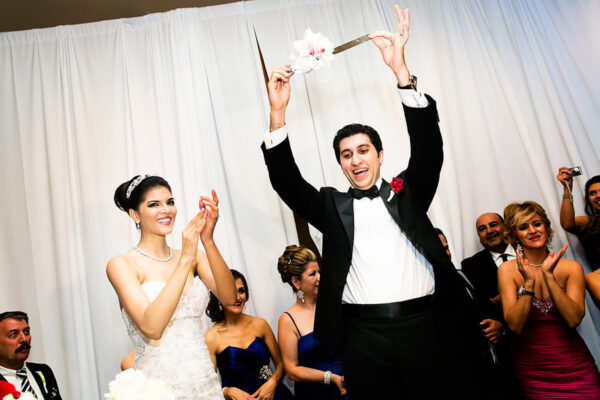 The “Rangseh Chagoo” dance is the performance with the knife when the family members of the bride and groom begin. The Persian music begins and the family members dance until the couple is able to take the knife from them. Finally with the knife both the bride and the groom start to cut the cake. Wherever in the world, there is a Persian community apart from Iran the dance customs are a prime charisma. The practices for the dances run for weeks till the day of marriage to celebrate the day for the brides and grooms. Aghd is another interesting part of the Persian wedding for the people in Iran. The bride and groom are taken to a separate room for the ceremony known as the “Safreh-ye Aghd”. It is when the rituals of the marriages are practiced between the bride and grooms. Both of their head is covered roof with a piece of fabric to make promises for their marriage relationships. The couples face to the East towards the sun for the rituals.

The couples head towards their place, east side on a carpet laid for them to walk through with a number of important ritual items placed on the side of their pathways. They have to see each of the items that symbolize prosperity and happiness in their married life. Persian cultures still have the influence of the ancient Zoroastrian traditions and customs. Persia still has the beliefs of the pre-Islamic rituals that are filled with glamor and luxury. Muslim traditions have changed with the evolution to modern days. Both the Persian and Iran marriages have differences though they are from the same root and culture.

The marriages in Iran are now for a multi-culture that is for the ethnic tribes and groups of people. But the Persians are still into their traditional culture that is attractive and luxurious at the same time.  Persian marriages last for more than seven days and each day has the customs which starts before the marriages. The wide width of the table is filled with various kinds of foods and decorations. It is on the Safreh ye Aghd that the table is a set of beauty with the following symbolic items.

The Luxurious Persian weddings are enticing culture that still survives as pride among the people. Anywhere in different parts of the world, marriages are a memory of fun, rituals, and happiness to families and friends.