What To See If You Travel To The Diamond Planets? 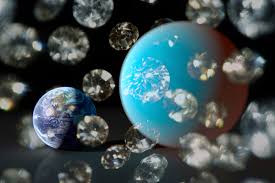 The Milky Way has been the treasure unfolding several secrets of the Universe. One of the most astonishing is the discovery of the planets made of Diamond. It is known as 55 Cancri e, which was discovered in 2004. Scientists studying the planet stated that there is the presence of carbon due to diamond and graphite present.

Apart from the diamonds, there are other elements present such as iron, silicon carbide, and silicates. Compared to the earth the planet has entirely different features. The carbon present is high in the planet made of a diamond while the earth has less carbon and a high amount of oxygen.

Diamond planet and its presence

Carbon has never initiated in development of lives, as earth. Due to the presence of the high amount of oxygen lives exists on earth. Apart from it, this carbon-rich planet is distinct from the other solar elements. Though according to humans it can be considered that it is one of the richest planets when diamonds are highly present.

Diamonds are one of the natural stones mined and nurtured after pulling from the earth. But its content compared to the 55 Cancri e is less. This may be due to the presence of different tectonic plates and unique thermal evolutions. It has given rise to a new planet filled with graphite and carbon. The size of the planet is about two times greater than the earth filled and made of diamonds. On contrary, it is one of the expensive places for diamond lovers. But surviving without oxygen is not possible though there are chances of water bodies existing.

Thinking about the habitable zone in this super-earth it is not possible relative to the earth. The thermal condition of the planet does not encourage lives, also the host star does not support it at all. Though there may be the presence of water and liquid it does not maintain as required for lives to survive.

Though the availability of diamonds can be exciting it is hardly available for anyone to experience and cherish the pride of owning stones. It may be amazing to know about the planet 55 Cancri e but the restrictions and inhabitable zones give the hard feeling. Extreme heat from lava instead of diamond rains

The heat or temperature results in an increase in the pressure of the planet, as a result, it leads to the formation of lavas. There are lavas present higher than the amount of land visible due to the excessive heat along with the formation of carbon. According to the earth, the estimated price of the planet ranges between 1000, million dollars to 30,000 million dollars.

The lava oceans can produce lights that are easily visible apart from the darkened land surfaces. The brightness should not be confused with the shines of diamonds. Perhaps there are chances the presence of these diamonds can reduce their value of it on the earth.

People will easily avail themselves the diamonds, the expensive stone of the earth may not have the same value if it can be extracted from 55 Cancri e