Quirky Practices Performed In These Temples Practices performed in the temples – It has always been the absurdity, the unconventional methods and practices, tempting humans to explore and visit. To find a temple in the vicinity of your home, workplace, school, college or other frequent visiting centers is not queer, if you are homing in India. On the other hand, finding a temple with hard to gulp-in practices, unusual way of praying is not a child’s play.

Albeit, all temples have a common set of rituals to followed yet they differ on travelling from one end to the other end of the Southern peninsula.

Let’s have a look into these quirky Practices performed in the temples of the country:

Practices performed in the temples –

Known for exorcising demons, ghosts or any other evil spirits from the body of the devotee, the temple is one of the most famous temples of the country. Offering penance in brutal ways such as, hanging from to the ceiling, banging heads to the stone walls, chaining and even pouring boiling water on head, are said to get them rid of the evil.

Talking about Prasad, the temple offers no sweet or savoury Prasad to the devotees. It is also believed that one should not turn back to the temple while returning from it. 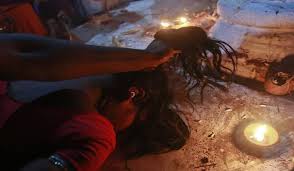 One of the oldest 51 Shakti Peethas in Indian Subcontinent, the temple remains closed for 3 days, every year in monsoon. It is believed that the Goddess bleeds because of her menstruation during these days. It is also said the sanctum of the temples turns the underground water running from the spring, red. Devotees offers piece of red cloth to cover the stone yoni, during menstruation in the form of Prasad. The deity in the temple is no one but the Bullet of Om Singh Rathore, also known as Om Banna now, how died in an accident in 1988. The natives of the place and the frequent visitors believes that the spirit of Om Banna resides in the bike and thus they constructed the temple and placed the vehicle and worship it. It is also believed that on doing so the spirit will safeguard them from any misfortune or misadventure. Worshipped by Chinese, thus the temple is named as Chinese Kali Temple. Interestingly, the devotees of the temple are served with noodles as the Prasad. Almost all of them are the migrants from China, have been living here from one than a generation. The absurdity of the Kodungallur Bhagavathy Temple is instead of worshipping the Goddess the devotees insult her with lewd songs and abusive language. This is done during the bizarre 7 days, Bharani festival, celebrated annually. Men and women wearing red apparel swarm the temple, hitting themselves with the swords and hurling in menace. Nonchalant about the blood smearing on their skin they perform this tradition. Yes, the God in the temple is served with alcohol and so are the devotees receiving vine as a Prasad. The alcohol is poured directly into the deity’s mouth believing it to be consumed by him. Unlike floweriest and people selling sweets outside the temple, you would find shops if liquor for the same. This temple in Padappai, recently came in news when an article about the unconventional yet delicious Prasad been served to the devotees. With special attention given to the quality of the food items, approved by the Food Safety and Standards Authority of India, each item has its manufacturing as well as the expiry date. The devotees on their birthdays are even served with a cake mentioning their names, besides the regular brownies and burgers.