There Is A Stairway To Hell On This Ghost Island If you have seen the movie Skyfall, then you must have heard about Hashima Island as well.

But apart from a simple mention of it being an abandoned ruin, there’s not much you would have found out about this forbidden place.

Famously known as Ghost Island, ‘Untouched Land’, ‘Battleship Island’ and many more mysterious names, Hashima Island is not an ordinary island. Eerily, it was abandoned by more than5000 people in 1974 and, since then, no human activity has ever been witnessed on its surface. It is said that the reason behind Hashima Island’s abandonment was the zero connectivity it offered. This probably explains why, in the year 2009, the Japanese government connected it to the nearest port of Nagasaki and, by extension, turned it into a tourist spot. Located nine miles from the Japanese Coast in the East China Sea, Hashima Island came into everyone’s attention in the year 1880, when it was sold to the Mitsubishi Corporation. After getting ownership, the corporation decided to start coal mining on the island. As the place was not connected to any nearby port, the company built a town on the island and accommodated 5000 residents that worked in the mines, making it a place with the highest population density in the world. The place soon went from having the highest population density to zero population density when all the residents had to leave the island in the year 1974. The reason behind this was said to be the unavailability of coal on the land, which made it pretty difficult for people to survive. After 1974, nobody ever looked back to the Island, leaving it as it was till 2009, when a dock connected it to the Nagasaki Port.

When looked at from a distance, Hashima Island looks like a secret gambling land where a lot of mischievous things happen. The truth, however, is a little creepier as this place is occupied by none but ghosts and spiders. As such, if you happen to be in love with exploring such mysterious and eerie ruins, then this place has a lot to offer you. Keep in mind that though the Japanese government has opened it for tourists, there are a few restrictions – You can only visit the island for a maximum of two hours and that too would have to be done with a limited number of people.

Though you can now explore this place, there are still a few famous spots on the island, such as the ‘Stairway to Hell’ and ‘Block 65’, that are out of bounds to tourists for reasons known to none (maybe their dangerous names have got something to do with it!). 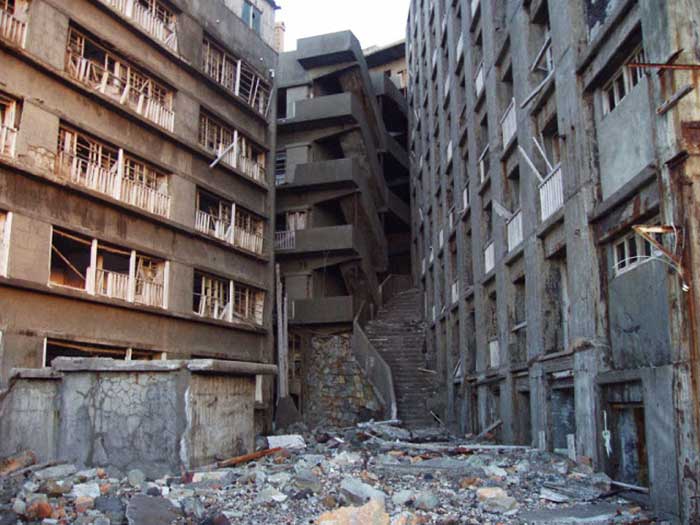 Eerily enough, there have been times when people have witnessed unusual activities and even the tourist guides swear by something spooky happening on the Hashima Island, though the historians say that there are no paranormal activities taking place!