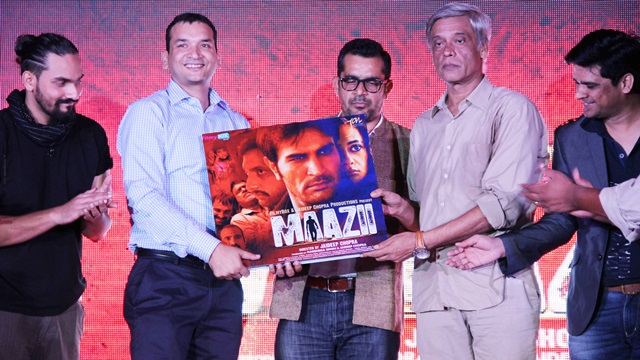 “Maazii”, which means the past, shows extraordinarily talented actor Pankaj Tripathi narrating to a dumbfounded cop in a mofussil thana his adventures at a home that the chronic criminal has just robbed.

The disconcerting prelude of this probing piercing pulsating study of crime and atonement is among the best opening sequences I have seen in recent times.

“Maazii”, which means the past, shows extraordinarily talented actor Pankaj Tripathi narrating to a dumbfounded cop in a mofussil thana his adventures at a home that the chronic criminal has just robbed.

In a very matter-of-fact tone Tripathi tells the officer how he raped the wife and killed the matriarch of the family. And then before we can ingest the infinite immorality of the goon’s proclamations, Tripathi kills all the cops and flees.

This is the kind of introduction Quentin Tarantino would have thought of. Or maybe Vishal Bharadwaj on a good hair day. Or maybe Ram Gopal Varma in his “Satya” season.

First time director Jaideep Chopra manages to keep the bloodshed and bullets on an even footing. Even when characters stumble and collapse under the weight of their immorality, the narrative is never caught hobbling on one foot.

Though the happy finale seems a bit of a go-home-happy concession, till the very end the sharply wound up tightly structured screenplay (written by Shirish Sharma and Sumeet Nijhawan, the latter also plays the film’s lead) keeps many steps ahead of us, leading us open mouthed through a labyrinth of crime and retribution.

Uniquely the film first introduces the bad guys. Then we meet the hero, a monk like florist Tarun (Sumeet Nijhawan) with a vivacious wife (television actress Mona Vasu, adequately cast) and a cute daughter.

Even though we know the idyllic family would soon see rough days, there is surprising skill evident in the way the screenplay creates a collage of crises in this nuclear family.

The narration is fitful and filled with events and incidents right till the end. But the wheels of the narration never get jammed with over activity.

Chopra makes vivid use of various locations. The hill station at the start with its postcard-perfect topography almost mocks the lies, uncertainties and the violent past behind the protagonist’s seemingly tranquil life. And the backwater crime towns are captured in their bare essentials. Naked and exposed.

The scenes are written deftly. In the sequences suggesting gut-wrenching violence the director allows the characters space to build the intrinsic tension without having to worry about where the next ‘cut’ would truncate the momentum of their emotional graph.

The in-sync sound is remarkably sturdy and unwavering in its determination to catch the characters’ inner voice as they grapple with the complex morality of their existence.

There are no larger-than-strife heroes in “Maazii”. The one hero that we take away with us is Tarun, who is grappling with the demons of his past by dodging the violence that hits him in the present. It’s a complex role, which newcomer Sumit Nijhawan plays with stoicism and smothered anger.

Just how much of this dispassionate implosiveness is attributable to the actor’s inexperience we do not know. It works fine for the character as he moves from a life of blissful stress free idyllism to a stunning finale that takes him through the cluttered bylanes of Meerut (in Uttar Pradesh) in search of a missing loved one.

The protagonist’s journey is undertaken in the spirit of a reversed pilgrimage. The sins that we presumed were washed away in a past phase revisit Tarun and scoff at his genteel existence. He must move without genteel grace from his working class sobriety to streetwise violence.

Last seen as Dhanush’s best friend in “Raanjhanaa”, Zeeshan makes an arresting appearance as a sharp-shooter in the second half. And Manish Choudhary’s cop act is again supported by credible dialogues.

Everyone gets clever and sensible lines to speak in this crime tale. I’d call “Maazii” the shocking surprise of the season.

Maazii, which means the past, also takes us back to the stylish thrillers of B.R. Chopra like “Dhund” and “Ittefaq”.

The sound design and the fluent and virile cinematography (Surjodeep Ghosh) bolster the ballsy script, whipping up a kind of excitement that is raw and earthy and yet very stylish.

Though set partly in the crime land of Meerut, no one abuses anyone’s mother or sister.

Though this is Chopra’s first film, he doesn’t try to impress with a fusillade of flamboyant gutturalism.

Because you are not force fed the violence you cannot take your eyes off the goings on in “Maazii. It is one of the most watchable films of the year which comes to us without the loud recommendation of stars promoting their products like detergent soaps.

The lather here is legitimate. You cannot miss this one.