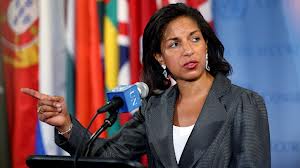 US National Security Advisor Susan Rice lobbied for a military strike against Syria and said in a speech it won’t be another war as in Iraq or Afghanistan.

US National Security Advisor Susan Rice lobbied for a military strike against Syria and said in a speech it won’t be another war as in Iraq or Afghanistan.

Rice was speaking at the New America Foundation, a Washington think tank, Monday as she outlined the US plan for a post-strike political settlement to resolve the underlying conflict in Syria, reports Xinhua.

She accused Syrian President Bashar al-Assad’s regime of using chemical weapons, saying the “escalating use of chemical weapons threatens the national security of the United States” and that of its allies.

Rice said if US fails to respond to it, there would be a greater risk of violence and instability in the Middle East and North Africa. She also raised questions “whether the United States is truly prepared to employ the full range of its power to defend our national interests”.

Addressing concerns of the US public on military intervention, Rice said the actions proposed by Obama will be “limited strikes to deter the Syrian regime from using chemical weapons and to degrade their ability to do so again”.

“This would not be the United States launching another war. As the president has said, repeatedly, this will not be Iraq or Afghanistan,” said Rice.

Rice said the US has been actively pushing for international support for the action, and will continue to pursue “our broader Syria strategy” after the military strikes, which she said the strikes “would complement and reinforce”.

“Our overarching goal is to end the underlying conflict through a negotiated, political transition in which Assad leaves power,” said Rice.

“The best way to achieve this is to keep the country and its institutions intact, but all parties have to be willing to negotiate.”

Rice also said the US supports the creation of a representative transitional authority that organises elections, and intends to “renew our push for the UN-sponsored Geneva process following any limited strikes”.