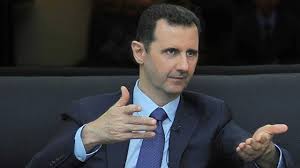 Syrian President Bashar al-Assad said he had agreed to put chemical weapons under international observation upon the request of Russia and not because of the American threats.

Syrian President Bashar al-Assad said on Thursday he had agreed to put chemical weapons under international observation “upon the request of Russia and not because of the American threats”.

“Any war against Syria would be destructive to the entire region and would plunge the region in a series of problems and instability for decades to come,” Xinhua cited state-run SANA news agency as quoting Assad.

Assad’s statement came during an interview with Rossiya 24 channel a couple of days after his administration accepted a Russian proposal that Syria place chemical weapons under international observation to avoid US military strikes over alleged chemical attacks in Damascus last month.

US President Barack Obama had been seeking congressional approval for military actions against Syria for an alleged Aug 21 chemical weapons attack outside the Syrian capital, which reportedly killed at least 1,429 people, including 426 children. The Syrian government has denied the allegation.

On Monday, come up with the proposal urging the Syrian government not only to put its chemical weapons under international control, but also to agree on their destruction and on full-fledged participation of the Organisation for Prohibition of Chemical Weapons (OPCW).

For the Russian initiative, Assad said in the interview that the implementation of such an initiative depends primarily on the will of the US to abandon its aggressive policies against Syria.