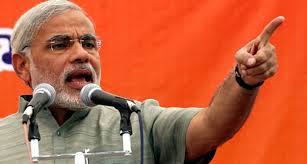 Modi also accused the central government of fooling people by attributing the rise in onion prices to decline in production.

“I tried to gather information who gave him (Gandhi) this ISI story… I came to know that a Rajasthan-based police officer who wants to fight elections on a Congress ticket passed this information to him and he in turn used in his speech,” Modi said while addressing a rally in Udaipur.

This was the second time the Gujarat chief minister targeted Gandhi on the issue after asking the Congress leader to either apologize publicly or name those allegedly contacted by the Pakistani intelligence at his rally in Uttar Pradesh’s Jhansi Friday.

Gandhi had made the remarks at a rally in Indore Thursday.

Modi said the “shehzada” (prince) is busy talking about family serials in his speeches, thinking these kind of things will help the party.

“Shehzada came to Rajasthan. Even his party men did not understand what he spoke, why he spoke, for whom he spoke,” he said.

Turning his guns on the Ashok Gehlot government, he asked why people should vote for a government not trusted by its own party.

Citing Gandhi’s speeches on communalism, Modi said the Congress is trying to teach his Bharatiya Janata Party (BJP) lessons, but questioned if it had faith in Gehlot government, and if it did then why did Gandhi visit an area hit by communal riots in 2009 without informing the state government.

Gopalgarh in Bharatpur had seen communal riots in 2009 in which 10 people were killed.

“The governor of Rajasthan who is from Congress… what did she say? If you cannot implement tribal welfare schemes, then let me do it. Would you like this type of government to stay in the state. They have ruined Rajasthan,” he said.

Taking a dig at the Gehlot government on the number of inaugurations of projects recently, Modi said that no scissors were available in the last few months as the state government was busy in cutting ribbons.

Accusing the United Progressive Alliance government of misusing the CBI, he said that when it became clear that party leader and former chief minister Vasundhara Raje will win in Rajasthan, the agency became active against BJP’s Gulab Chand Katara, the leader of opposition.

He said a senior official directly blamed Prime Minister Manmohan Singh for the coal scam, referring to former coal secretary P.C. Parakh, who reacted to his name figuring in a FIR by saying that if he was indicted, then the PM should be too.

“If this kind of allegations would have been levelled against me, Vasundhara ji or (Madhya Pradesh Chief Minister) Shivraj ji (Singh Chouhan), we would have run into problems.

Modi also accused the central government of fooling people by attributing the rise in onion prices to decline in production.

“In fact, onion production has declined by only five percent and prices on the other hand have gone up nearly by 1,500 percent…. onion is grown mainly in three states – Maharashtra, Andhra and Karnataka, all Congress-ruled states,” he claimed.

“Congress is not concerned with rising prices, all they are concerned is with corruption in 2G and coal,” he said, urging the people to throw out Congress from Rajasthan.