Barack Obama’s Preparation To Welcome PM Modi Is So Hilarious That You Will Laugh Your Lungs Out! The who;e world is looking forward on to see PM Narendra Modi meets with American President Barack Obama at The White House on 26 and 30 September 2014.

In 2002, when Narendra Modi was Chief Minister of Gujarat, his visit to United States was denies due to alleged involvement in Gujarat riots against Muslims.

In last 12 years, Narendra Modi has changed the scenario completely.

Once denied and now welcomed Narendra Modi is visiting United States of America for 5 days.

Let us have a look how hilariously The President of United States Barack Obama is preparing to welcome Indian Prime Minister Narendra Modi in The White House. 2).   Barack Obama talks to his Chief of Staff Denis McDonough 4).   Barack Obama talks to Nancy Pelosi, The Director of newly created Dress Code Department. She has to look after the dress code of every individual who remains present at the time of Indian Prime Minister Mr. Modi’s visit at The White House. 7).   Barack Obama Talks To Jacob J Lew, The Secretary of The Treasury of United States of America 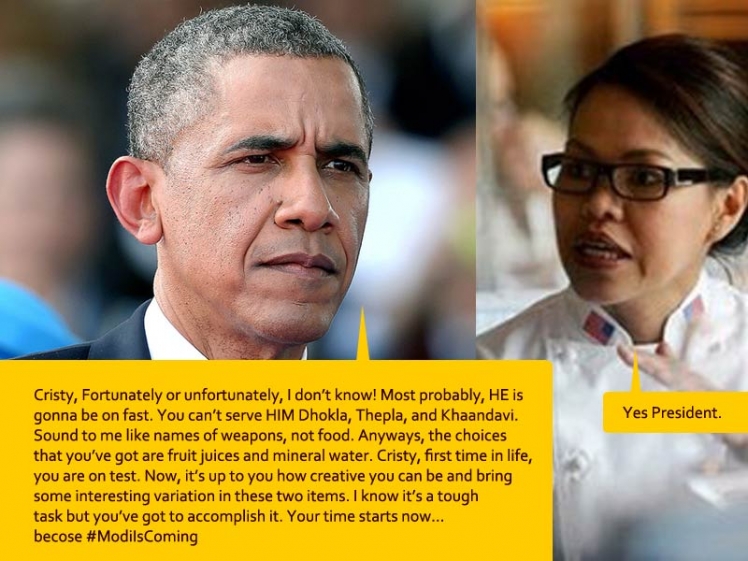 10).   Finally, Barack Obama is having a chat with Vice President of United States Mr. Joe Biden After talking to Japan and China, Narendra Modi has not remained just Prime Minister of India but rose to different level.

The way he looks at the things is so unique, so different, and so result oriented that his foes became his admirers.

His approach, his thinking, his strategy has made him an International Leader

This is just a beginning.

Let’s hope for some surprising surprises ahead…