This Short Film Kajal Is The Best Thing to Watch in YouTube Right Now, Know Why When it comes to cinematic genius, short films are creating tsunami waves in YouTube now. Short films cover every genre from neo-noir to romance with veritable eloquence and send out strong messages in just a matter of minutes. Summing up a film in minutes is like setting an Elephant up in a molehill and the directors are doing really good job at that. Recently, A new short film called Kajal has been in talks which celebrates the hero within every modern woman now.

Short Film Kajal has given the women oriented film genre a fresh lease of life and has made statement too. 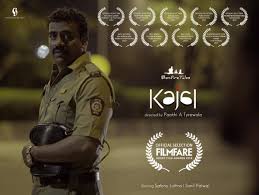 The plotline, precisely the concept might sound pretty clichéd to you, that is a woman’s survival metrics in the male dominated world but how you present the old wine in a new bottle proves your creative genius.

People are nowadays reproachful about everything as directors are only encashing upon the country’s trending flaws, so good intent is also being scrutinized. Short Film Kajal is directed by Pakhi Tyrewala and we have a problem with the run-of-the-mill tagline to begin with which goes like- ‘A woman’s fight for survival in a world dominated by men’.

Short films always have limited resources but the director has breached the difficulties and the film outgrew its labels. It is a silent rage that the images bring forth. The film opens at an empty office after closing hours where a girl diligently waits for her boss to sigh off a document who seems to be whiling away time swiping right in his smartphone.

While leaving downstairs, she dodges past jeers from a cheap security guard because it’s well past midnight. A mysterious chap leaves behind a ‘package’. She ropewalks her way from the scrutinizing male glances and even becomes spooked by a nosey cop. It doesn’t take longer, however for her to infuriate and the gutted woman turns into a loaded-gun. She returns home to her betting-thug husband and discovers the contents of the mysterious package which transmutes her something else as we comprehend from her body language. She stands there frozen as a mute spectator. The most haunting scene bursts into the sight when her husband sleeps at night and she reacts to the package and her expressions are redolent of her discomfort. We understand a history about her that lead to her strangely muted persona. The treatment of this scene is laudable because everything is served on the table by expressions, not by going into traumatic flashbacks which other films vouch for. The protagonist’s trouble is not boisterously presented in the film but strikes the same sympathy with the subtle treatments. Her next day brings her to another war where she unleashes her rebel self sans the stomach-churchingly-triumphant background score. The Kolh-smeared eyes reflect upon her darker impulses. She makes the scene come alive by being the colour in the grey scale.

Short Film Kajal here comes across a ‘device’ of empowerment, an empowerment of a different kind, without spending a word and by just painting a psychological portrait. She is distinguishable here as if she is  last survivor of this planet. She is alone in the crowd of the*likes of her, the urban-isolated contemporaries.