Things About Morocco That Make it A Coveted Travel Destination Morocco is a South African nation bordered by Atlantic Ocean and Mediterranean Sea. Its name figured in the list of key travel destinations around the world and there are fair reasons for it.

Morocco is a pick-me-up destination because it doesn’t bruise your wallet and it is a Mediterranean destination of Europe. The foremost reason why you should explore Morocco aside from the idyllic landscapes is the archaeological sites, the remnants of ancient past which stand souvenir to the grandeur bygones times had.

Here are the 10 reasons why Morocco makes for your perfect travel destination:

Meekness is unique in its own for being the 9th century Medina surrounded by a 21st century city.  There are Mausoleum of Moulay Ismail, Bob Mansour (One of the most well-maintained gates of Morocco and Meeknes Medina which is called the Old Arab Quarter. This is the World Heritage Site, the Old City of Fez. It has 2.4 square miles and is one of the most well-reserved cities of Arab Muslim world. It consists of world’s most complex mazes and treasure troves in the alleys. This is a remote place in Morocco but a gem all right. There is an overnight experience conducted which you will barely forget in your life. After all, spending a night in the lap of Sahara desert gives us all goosebumps. The journey is tedious but breathtaking nonetheless. You can also go for a camel trek here besides listening to ear worms of barbaric music and relishing the authentic Moroccan cuisine. 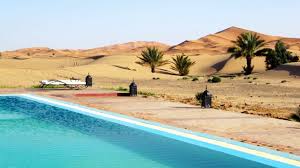 Bollywood swears by Morocco to shoot the desert scenes. It had been a magnet to the Bollywood directors since 60s and numbers of Hollywood movies have been shot there, goes without saying. Movies like Cleopatra, Kingdom of Heaven, Sahara, Lawrence of Arabia, and the current HBO series Game of Thrones is being shot there too. 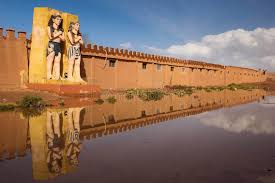 This is quintessential on your visit to Morocco whose depth leaves you in splits. You will have numbers of museums in tow to glimpse upon the old heritage of Morocco. Also, here you can shop to your heart’s content only you have to master the art of haggling. There is Jama-El-Fnma (the assembly of trespassers) which looks pristine as soon as the dusk falls. Not to mention, Marrakech too is a World Heritage Site. From the top of Jama-El-Fnaa, you can do a lot of ‘people watch’ to understand the insights of Moroccan life better. This is one of the landmark sites in Morocco for being beautiful. This enormous mosque looks surreal and you can glimpse on the impressive construction taking a stroll around it. It comes alive on Sunday mornings among the hustle bustle of tourists.

It was created by a French Painter called Jacques Majorelle which later became the home to designer Yves Saint Laurent. This garden is replete with oriental feels and exotic plants. We urge you to keep these places in your bucket list once you visit Morocco.