One Thing We Need To Learn From The Students Virat Kohli, India’s pioneering athlete pegged a brand new deal with PUMA India and under this partnership, a new pan-India initiative is slated to be launched called #comeoutandplay. Kantar IMRB has come on board to bolster the physical activity and sports adoption in India. Both Virat and PUMA holds this campaign dear and envisioned a greater future of this. They have jointly vowed to encourage Indians to play more sports, change their perception towards playing and including sports in their ever day activities.

Kantar IMRB has come on board to bolster the physical activity and sports adoption in India. Both Virat and PUMA holds this campaign dear and envisioned a greater future of this. They have jointly vowed to encourage Indians to play more sports, change their perception towards playing and including sports in their every day activities. 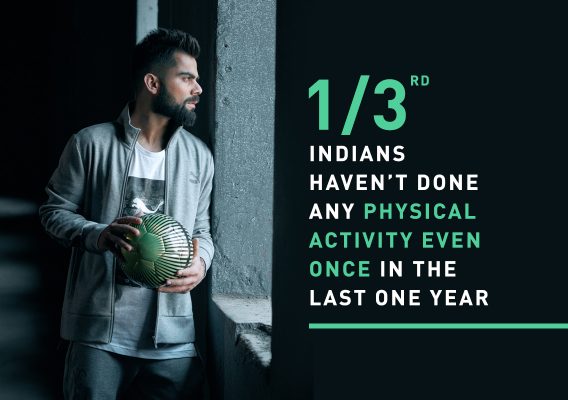 As a groundwork, Virat and PUMA initiated a study with Kantar IMRB to assess the state of play in India to figure out the amount of time Indians provide in playing and what is its bearing on their personal lifestyle. Here under provided are the data extracted from the survey:

Here’s what the study discovered:

The #ComeOutAndPlay campaign rose to popularity as soon as Virat Kohli launched a session in FB in which he told us about the state of play in India, further adding that needs to make time for play. #ComeOutAndPlay campaign prompted Honourable Sports Minister Rajyavardhan Rathore to launch a fresh new counterpart called #HumFitTohIndiaFit which received thunderous response in the social media too. However, its popularity rose to superlatives, that is to say, another feather was added to the hat when Virat Kohli gladly accepted the challenge given by Mr. Rathore and echoed his thoughts to get Indians to #ComeOutAndPlay more. This social exchange brought forth the #ComeOutAndPlay conversation in foreground once again. Virat walked and extra mile to make this initiative a grand success. He tagged Honourable Prime Minister Mr. Narendra Modi in the same social media post who readily accepted the challenge and spoke about the need of more Indians taking sports as a regular activity in his show Mann Ki Baat.

More students need to play together.

Not every Indian household breeds legends like Kapil Dev, Sachin Tendulkar or Virat Kohli because they are borderline obsessed over creating Next Chetan Bhagat, an IIT/IIM alumnus turned writer who judges the dance reality shows. Well, Sports have its distinct glamour that one can dare deny but one needs to be hardworking and ruthless disciplinarian to carve a niche in the International sports scene.

Yes, you can get away with blaming the poor infrastructure and mud-sling to the biased BCCI whose misdemeanours have left a bitter aftertaste, but today’s youth needs to put their best foot forward to turn the table by engaging more into sports. The key to success in sports is being patient and consistent.

No matter how hazardous is your educational life, you need to take sports as your daily activity which will increase your concentration, help you steer clear of all sorts of negativity, prepare you to take new challenges and push your boundaries thereby experiencing a rapid growth in your respective careers. If the youth have an inclination towards watching sports and talking about it, then why not they share the load of the likes of Virat Kohli and PUMA who are indefatigably trying to engage more Indians into sports and promote fitness? You can do this by hitting the field yourself. Think about it!

However, it is a symbiotic relationship with the students and the celebrities as they both learn from each other. As teenagers, that is to say as students, we indulged in a lot of physical activities and the evenings were full of frolics and gambols in the field. Boys flocked in the fields with their bats or badminton rackets and girls too did never lag behind in terms of sports. #ComeOutandPlay salutes the spirit of our teens and encourages them to double their efforts to make this endeavour a grand success. There is no denying that we learn a lot from the students and #ComeOurandPlay wants to channelize it strategically to boost the national sporting spirit.

#ComeOutandPlay is a standout campaign where the boundary between celebrities and fans fade out because we all should bear the responsibility to establish India as a fitter and more active nation in the global forefront. If your little contribution can make bigger difference then why not #ComeOutandPlay?

So, join the #ComeOutAndPlay campaign by Virat Kohli and PUMA India and make your

contribution to the national sports scene, however small because it’s never late to play!