Power Of Dharma Or Religion As Mahabharata In Modern Era Mahabharata has always been living as a great influence on great people as the power of Dharma or religion. As it is not only an epic but a teacher to the modern era, few of major impact and inspiration to the modern era are:

When we look into the family of the King of Hastinapur, the Kaurava and Pandavas, both had massive differences in their nature, culture, and skills. While Kauravas being a total of 100 in numbers did not have the ability comparing to the Pandavas. Each brother of the five had the individual ability that made them the strongest opponent to fight and stand at the battlefield in Kurukshetra. So, inspired by the power of Dharma, in Mahabharat it is a point that impresses the modern era is to be skilled and prepared instead of looking for support from others. Self-sufficiency was one of the reasons that developed the power of the Pandavas. Mahabharata has been the epic of Hinduism that consists of the parts of Gita, the sacred book of the Hindus. This ancient book inspires people to learn about the hardships that arise from jealousy and also the conspiracy that can arrive anytime from anyone. The development of a conscious mind is possible through the learning of the quotes in Gita used in Mahabharata that describe the truth of life. Enabling you to be learning from the religion about the different stages of hardships and the way a strong bond can pull you to be bold and divided to fall. 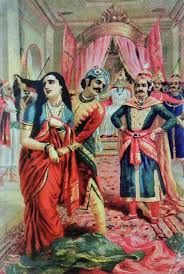 The lady of five men, Draupadi is still remembered in history, when her attire was pulled to open by the Kauravas after losing the bet with the Pandavas. This was the time she could only remember Lord Krishna to save her from humiliation. Lord Krishnas saved her from the shameful situation by providing Draupadi the drapes of the saree on her body.

Modern Era has been inspired by the story of Mahabharata that reveals about saving womanhood. They were weak and mostly dominated from the ancient times who need respect and care from their society. Hindu empire has always looked for a male ruler, or nothing different was seen in the story of Mahabharata. Both Pandavas and Kauravas finally ended up in the Kurukshetra war to occupy the throne of Hastinapura. When the requirement of marrying more than one woman tradition was increasing to find the most appropriate ruler for the empire. Similarly, the rivalry increased between the mothers to provide their son the thrones which led to the killing of male infanticides. Modern era-inspired had always looked for male children through the thoughts that have changed after women are provided with better education and opportunities. Politics and religion are both interwoven from the epics of the ancient times, the political mind to win as a fine archer Arjuna is all time a great example for all eras. So, when Eklavya being a Kshatriya was one of the best disciple and student of Drona. But finally, Drona asked for the Guru Dakshina from Eklavya, his right thumb. So, Arjuna became the best-trained archer as the student of Drona acharya.

Similarly, in the modern era, the story of Mahabharata is influential to establish power and success through the games of politics.