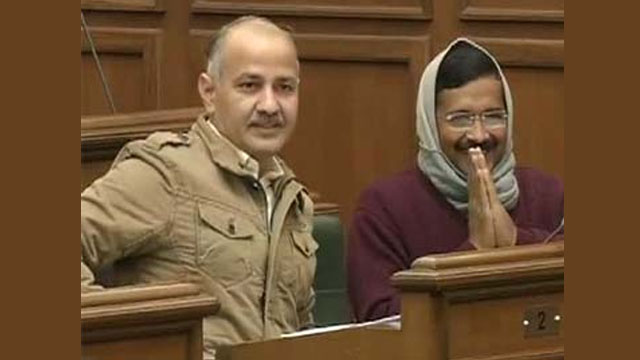 In an emotional pitch on the floor of assembly, Kejriwal reads out his plans stated in his party’s manifesto.

The newly elected chief minister of Delhi, Arvind Kejriwal, won the floor test for his government today. After an emotional pitch to the house, where he re-introduced his party’s agenda to the Delhi assembly, the speaker asked for the people to stand who support the trust motion.

With Congress party already declared its support to AAP, Kejriwal’s government was saved.

Earlier in the evening, while speaking on the floor of the assembly, Kejriwal had said that this trust vote will make clear as to how many people support the clean government of a common man.

It seemed as if he was reading his election manifesto rather than answering the questions put forth by his friends and opposition alike. He reiterated that he will not spare the corrupt.

While debating on the trust motion, put forth by AAP minister Manish Sisodia, BJP leader Harsh Vardhan questioned as to what “compelled” the debutant political entity to form a government in Delhi with the Congress party’s support.

“When his (Arvind Kejriwal’s) party emerged, people of this country saw new hope. Though the party emerged due to Anna Hazare’s movement, Anna Hazare decided to stay out of politics,” said Vardhan during a debate on the trust vote in the Delhi assembly.

“Arvind Kejriwal had sworn that he would neither support nor take the support of the Congress party. I don’t know what compelled him to seek support from the Congress – a party that was shown the door by the people in elections,” he said.

Referring to the earlier speech by Delhi Minister Manish Sisodia that the assembly was the representative of the people of Delhi, the senior Bharatiya Janata Party leader said: “Why are they (AAP) negating the mandate of the people and taking the Congress party’s support.”

Just before Aam Aadmi Party was mulling over forming government in Delhi, there was a feud inside Congress party where there was a massive protest against its ‘unconditional’ support to it. That feud forced senior leaders of Congress party change their stance on the support.

There was also a video circulating in the media where a Congress leader was hurling abuses on AAP leader Arvind Kejriwal who was going to be the chief minister of the national capital. Yet, AAP went ahead with its referendum clearly stating that it wanted to form the government with Congress – once ‘dirty’ and ‘corrupt’.

Harsh Vardhan said: “In the 15 years of Congress rule, there have been many scams. Our party kept highlighting these. I heard Kejriwal saying if Harsh Vardhan had any evidence, he should share it with us. I want to ask the chief minister, why he claimed that he would act against the corrupt people in Congress if he had no evidence?” He questioned the decision of the AAP government to ban red beacons for Delhi MLAs saying the Supreme Court order on this was a year old. “But the manner in which you presented facts here made it seem that the onus of cleaning up politics lay only with you,” he said. “You (Kejriwal) didn’t want security, but at least 4,000 policemen were deployed for your security at the Ram Lila Maidan,” he said. The BJP leader said there was nothing special about the chief minister using the metro to travel as thousands of security personnel had to be deployed for this. Harsh Vardhan said: “We (BJP) are also for clean politics, but do we need to demonstrate it in this manner?”

The Bharatiya Janata Party, with 32 members, is the single largest party in the assembly. After BJP’s views, Congress’ Arvinder Singh Lovely took the floor and warned the AAP government against taking hasty decisions that may ultimately “hurt” the national capital’s residents.

“The party should stop taking decisions in haste that may ultimately end up hurting the people of Delhi. Such decisions will halt developmental issues,” lovely said.

Lovely, who is also the party’s state chief, was referring to AAP’s announcement of providing 666 litres of free water to each household per day, and 50 percent subsidy on power tariff for those consuming up to 400 units of electricity.

He contended that water in the national capital had in fact become costlier because of the ten percent hike while providing subsidy on electricity was nothing new as the Congress too was doing the same.

“How are you (AAP) different form us (Congress)? We were also giving subsidy on electricity,” he asked.

However, Lovely reiterated that his party would back AAP in the trust motion and would continue to do so as long as the party works for the welfare of Delhi’s people.

In all, AAP will now move ahead with its plans and open more sops for people of Delhi as promised. As to how sustainable this strategy of theirs will be, will be clear only after a quarter of the year is passed.