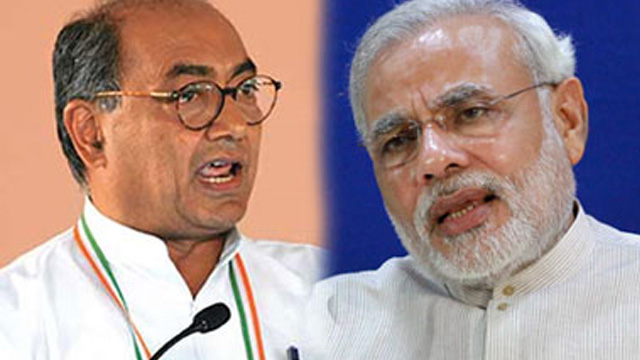 Attacking the BJP’s prime ministerial candidate Narendra Modi, Congress leader Digvijaya Singh on Sunday said the number of poor families has gone up in Gujarat during his tenure as chief minister.

Attacking the BJP’s prime ministerial candidate Narendra Modi, Congress leader Digvijaya Singh on Sunday said the number of poor families has gone up in Gujarat during his tenure as chief minister. The BJP sought to rebut his claim, saying they had actually decreased.

The Bharatiya Janata Party (BJP) also took objection to Congress using the word circus in relation to Modi’s rallies, terming the comments “irresponsible and rude” and asking if people came to Congress meetings to watch “buffoonery.”

Digvijaya Singh claimed that the number of Below Poverty Line (BPL) families has increased in Gujarat during Modi’s tenure.

“Number of families under BPL has increased under Modi rule in a developed state like Gujarat. Another example of Gujarat model of development,” he tweeted.

“Modi acolytes would again respond the way they have been trained to – give galis (expletives) but these are authentic statistics from Planning Commission.”

Digvijaya Singh also put out data on his blog about Gujarat lagging all India figures in decline in poverty between 2009-10 and 2011-12. He also said Gujarat trailed states like Maharashtra, Delhi, Karnataka and Tamil Nadu in foreign direct investment inflows during 2011-12.

The BJP, in its response, sought to refute his claims.

Hitting back, it said that the rate of decline in poverty ratio in Gujarat has been lower compared to Rajasthan “because in 2004-05, Rajasthan had higher ratio of BPL population.”

“Such irresponsible and rude comments clearly reveal the mindset of arrogance and (the) low level to which the Congress spokespersons are willing to drop the public discourse and debate,” he said.

Naidu accused the Congress of “insulting wisdom of the people who are willingly and enthusiastically attending” Modi’s rallies.

“Then, what about the Congress rallies? Are the people coming to watch buffoonery of Congress leaders,” he said.