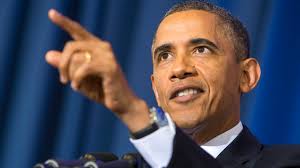 As Iran and six world powers struck a historic deal early on Sunday over Tehran’s nuclear programme, US President Barack Obama said it includes “substantial limitations that will help prevent Iran from creating a nuclear weapon.”

As Iran and six world powers struck a historic deal early on Sunday over Tehran’s nuclear programme, US President Barack Obama said it includes “substantial limitations that will help prevent Iran from creating a nuclear weapon.”

Key players will work over the next six months toward a “comprehensive solution” on Iran’s nuclear programme, Obama said in a nationally televised address from the White House shortly after the deal was announced at 3 a.m. in Geneva.

The “initial, six-month” deal freezes Iran’s nuclear development programme in exchange for lifting some sanctions while a more formal agreement is worked out, CNN reported.

The deal, which capped days of marathon talks, addresses Iran’s ability to enrich uranium, what to do about its existing enriched uranium stockpiles, the number and potential of its centrifuges and Tehran’s “ability to produce
weapons-grade plutonium using the Arak reactor,” according to a statement released by the White House.

Iran also agreed to provide “increased transparency and intrusive monitoring of its nuclear program,” it said.

The deal halts Tehran’s nuclear programme, including halting the development at the Arak reactor and requiring all of the uranium enriched to 20 percent — close to weapons-grade — to be diluted so it cannot be converted for military purposes, the White House statement said.

The Iran nuclear deal is a first step requiring actions by both sides, which have “a strong commitment to negotiate a final comprehensive solution,” Ashton said.

CNN said there were conflicting reports about whether Iran’s right to enrich uranium had been recognized. The deal does not recognize the right, the news channel cited a senior administration official as saying.

But Iranian Deputy Foreign Minister Seyed Abbas Araghchi — on a Twitter feed commonly attributed to him by Iranian media — said that “our enrichment programme was recognized.”

“Congratulation(s) to my nation which stood tall and resisted for the last 10 years,” Araghchi was quoted as saying in the post.