‘We Need To Start Developing Our Grassroots Football’ 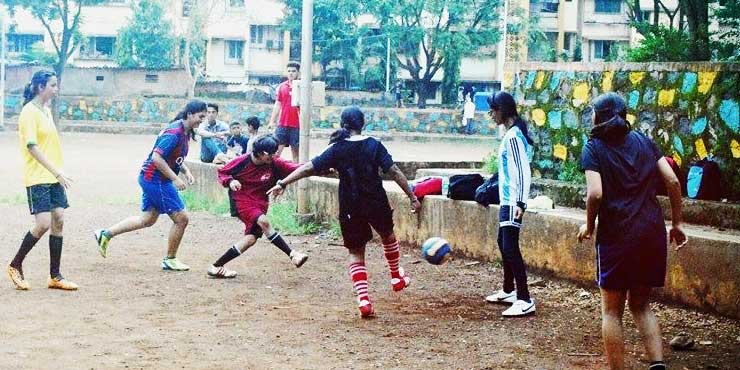 Football in India – But even if cricket has a major say in our country, football has not left behind. With the onset of ISL (Indian Super League), the love for the beautiful game can blossom here very well.

Here in India, cricket is touted as one of the biggest sports ever. The likes of IPL and CLT20 has brought the craze amongst these mad cricket fans to a whole new level. But even if cricket has a major say in our country, football has not left behind. With the onset of ISL (Indian Super League), the love for the beautiful game can blossom here very well.

We spoke to the young footballer about ISL, Indian women’s team and many more.

Since I was a small child I was always interested in sports. Having a twin brother everything we did was competition based. We would always fight to see who was 1st to win the competition. Playing in my building compound, I started playing cricket 1st since all the boys in my colony were cricket fans but slowly and steadily we started playing football in the monsoons since cricket became a little difficult. Many a times I was the last man or the goalkeeper in the team and my slide tackle were my speciality always. So with the help of that I started enjoying football and the minute I changed my school from St. Joseph (R.C.Church) to St. Anne’s (Fort) i started getting involved in football. And this change helped me develop as a better and smarter player.

>  Starting up, how difficult was it to play the sport
Well most of the parents in India did not support their children when they started playing some kind of sport during my days. But it was totally opposite for me. Both my parents have played some sport or the other during their school/college days and they were very encouraging when I took up football. Infact. if I remember clearly my mom was the one to inquire about football in my school once I shifted to St. Anne’s High School. In our days we always got some criticism that women’s football would never improve but things seem to be changing lately and many people have started to identify that maybe the Indian Women’s Football Team may just qualify before the Indian Men’s Football Team.

> Indian football is still galaxies away from other countries, what do you think the reason is ?
I feel even though we are the 2nd most populous country in the World our thinking is very backward since we still respect out Culture and Heritage. Getting back on track means going through alot of history and also looking into the future and what it holds for us. We need to start developing out grassroots football to a great extent and also ensure that each and every club in India is doing so.Only then will we be able to progress.

>  Women footballers are ranked 50 in FIFA rankings unlike men, still the women’s football lacks financial help and coverage. Your views
Well the Indian Women’s National Team are currently ranked 53rd and the Men’s Team are ranked at 158 at present. And this has been the case since many a years now. Many argue that the women’s team are ranked better is because there are not many teams around the world. But I feel that isn’t something we need to even bother arguing about. The Indian Women’s Team have not got enough exposure in terms of playing abroad or enough national tournaments in India. Due to this not many people know about what the team is doing. I started the Indian Women’s Football Team on Facebook only to make people aware of the latest news about the team. People will be ready to come forward and help provided we ask for help.

> ISL is touted to be the big thing for Indian football, what do you reckon?
ISL is surely making a name of its own in India. Too soon to say as to whether it will be a positive or negative League yet. Remembering though that alot of money, time and effort has gone into trying to get this league to start which was supposed to start last year infact. AIFF has modified its calendar’s to a great extent, shifting the I-League by a few months. All this surely has been a planned effort.

The Advertisements too are entertaining and Each and every team has something special about them be it their player or their technical staff or maybe just their owners. If ISL works out to be a super successful even we might just see a Indian Football starting to develop specially at the grassroot level where we still seem to be lacking even with many grassroot programme’s coming up.

> Will FIFA U-17 WC help our country achieve some big goals in coming years
We surely must be one lucky country to get to host the FIFA U-17 World Cup in 2017. As you know we have never taken part in a FIFA World Cup before for any age/gender category. The FIFA U17 WC will surely ensure that we bring in professionalism to the field of football. Getting our infrastructure upto mark and of the Highest possible standards. Bring in professionals to do something we could have done ages back. The FIFA U17 WC has also ensured that AIFF starts concentrating on developing its U14 category so that by 2017 the best of players would be able to represent India at the FIFA World Cup. I feel if we are able to kick start the FIFA U17 World Cup in style, we could easily try and host a women’s world cup then,

Well I have a few Icon in various fields of sports.
Barely a year back I met an Indian Referee – Uvena Fernandes now a FIFA Assistant Referee and I must say I look upto her alot. Even at her age she manages to take care of work, family and her kid and referee and do an excellent job at that.

Bembem Oinam – 1 of the oldest players in the IndWNT currently. She has given her heart and soul to Indian Football for the past 19 years. Not many people know much about her and her dedication to football. I really idolize her.

Abby Wambach – her style of playing, her attitude on and off the field. I have a dream to watch her play football live and hopefully that comes true next year during the World Cup in Canada.