Stephen Hawking spent a significant amount of his life in the Centre for Theoretical Cosmology in the University of Cambridge.

The key theory of Stephen Hawking was the radiation emission from black holes that is staunchly called Hawking radiation Hawkins was the first person to devise the theory of cosmology that was later approved by general theory of mechanics and quantum mechanics.

However, Stephen Hawking’s life was not bed of roses as he was afflicted with motor neurone disease which caused him speech impairment. Although he lost his voice, there was a speech-generating device on his constant support to communicate. Stephen Hawking died on 14th March, 2018 at the age of 76 and we are sorrowing on his loss completely.

People like Stephen Hawking, Helen Keller who never ceases to inspire us by setting an example that however tough it may get, the tough always gets going. So, here goes some quotes from Stephen Hawking that elucidate his idea of life better.

‘Quite people have the loudest minds’:

A quiet person is a good observer. Because his brain is not shallow and he is a deep thinker, he tends to speak less and observe more. He is constantly learning from life and that knowledge create noise in his mind so talking much about them is not necessary. ‘People who boast about their IQ are losers’:

A conceited person is often blind about his own shortcomings because no one is born devoid of them; they have an illusion of knowledge hence have no qualms in boasting about that. But the wise radiates erudition by default, he doesn’t have to boast. ‘Intelligence is the ability to adapt to change’

People who are fearful of change are rotting in their comfort zone. Life is about pushing boundaries and intelligent people will do that effortlessly without complaining. “ I have noticed even people who claim everything is predestined, and that we can do nothing to change it, look before they cross the road”

Nothing is predestined and happens in involuntary reflux. So the person who leaves everything on destiny is just taking a chance or probably is lethargic because no one is certain if anything called destiny even exists. 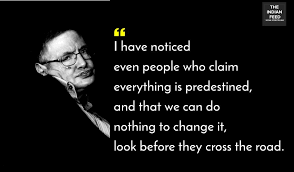 ‘Life would be tragic if it weren’t funny’:

Humour is the great refuge. This is the brightest part of life. Life is funny with unpredictable twists and turns so we have got to see the brighter aspect of it. These are the life-changing quotes by Stephen Hawking. Now that the legendary scientist has passed away, we offer our sincerest gratitude to him and vow to never forget his contribution towards exploring the Universe.