What Is The Purpose Of Celebrating World Genius Day? Genius day celebration is in honor of Albert Einstein. On 14th March of each year, the day is celebrated. It is a way to develop the awareness of science and the requirements of intelligent people to dedicate themselves to science. The day is also considered the scientist day to cherish the achievements of discoveries, studies, and inventions.

Though Einstein’s level of intelligence is still impossible to find, still there are scientists who have brought in development through changes and inventions. The day is specifically to remind society about the importance of science and the Genius of Einstein. The discoveries and inventions of Albert Einstein are the results of his far-sighted thoughts. His innovative thinking, trials, and practices for inventions have given rise to theories including their implementations. Some of his popular theories are

Another common example of the special theory of relativity is the GPS system that is used to track the position of any object. Vehicles have a GPS system and it allows them to track the passengers as well as the movement of cars.

In 1921, Albert Einstein received the Nobel prize in physics for his genius inventions. His discoveries in form of theories have been a pathway toward developments in science and technologies. Scientists and technology together are working on his theories to gift new age with technologies. 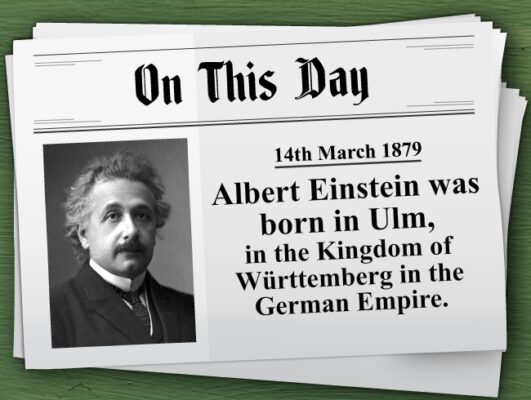 Why was the day considered Genius Day?

Albert Einstein is considered as the scientific Genius for his inventions in energy release formula. Often his invention is related to the nuclear bombs but it was not his advent to discover the weapons. The theory does not describe or provide any clue on the composition or formula of bomb discovery.

His invention of the relation between energy and mass has pushed science and technology to modern and useful inventions. Several scientists and researchers are working day and night to provide new thoughts and inventions. It is the reason they are given the honor of scientists, to recognize their achievements. Also, recognize the inventions of famous scientists who have contributed to science and provide the power of education and knowledge to the upcoming generation.

The day started to dedicate and remember Albert Einstein. Later it became famous as Genius as well as Scientist day.  14th March is his birthday, he was born in Ulm, Germany but he lived in New Jersey, US.