Nobel Peace Prize: Is It An Attempt To Bring India-Pakistan Closer? 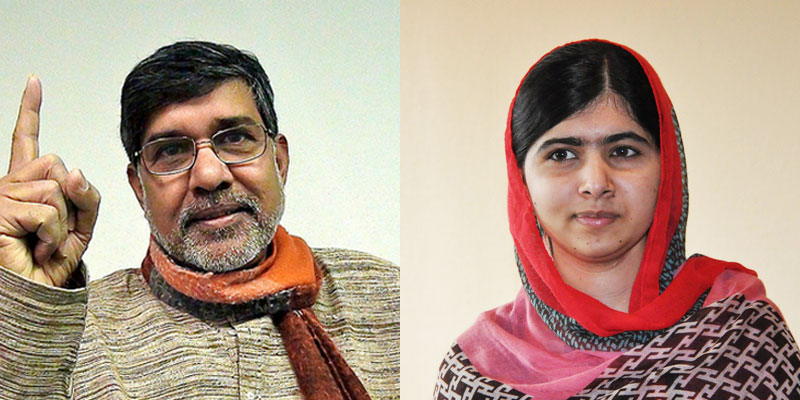 Nobel Peace Prize 2014 To India And Pakistan. The Nobel Foundation has awarded the Peace Prize jointly to an Indian and a Pakistani at a time when the two countries are almost at war with each other.

This time, the Nobel Prize Commmittee has brought happiness for the Indian subcontinent.

Satyarthi, 60, runs the organization Bachpan Bachao Andolan (or Save the Childhood Movement) which protects the rights of children in India indulging in anti-trafficking, anti-slavery and anti-bonded labour activities. The organization has saved lives of more than 80,000 children since its inception in the 1980.

Malala, 17, took a bullet for girl education in Pakistan and is the youngest to receive the Nobel. She is the founder of Malala Yousafzai Foundation which works for the rights of girls to education. Her concerted efforts are severely criticized in her own country by the militants but have brought smiles on many faces all over the world.

The Prize has been awarded to the duo at a time when India and Pakistan are almost at war. The Pakistan has been violating ceasefire and shelling along the international border without any provocation from the Indian side. Yesterday was the first time that the Indian troops retaliated to the Pakistani firing.

Defence minister Arun Jaitley had given a stern warning to Pakistan saying that “India will make the cost of Pakistan’s adventurism unaffordable.”

The Pakistani army does not want to lose its heroic status in the country and projects India as a Hindu nation which is a grave threat to Islam. After the election of Prime Minister Narendra Modi, this projection has gained momentum.

In India as well, there have been big instances of communal disharmony. The riots during the UPA government were a big example of that. Till now, to prevail peace between Hidu and Muslim community is a difficult task and example of this were riots in Uttar Pradesh, Gujarat and recent incidence of communal clashes in Chhapra, Bihar during Durga Puja and Id-ul-Aza celebrations.

Maybe the Nobel Committee wanted to do its own bit to bring harmony between the two countries and the two communities as well.

Maybe it is a good step towards peace.