What Does the Concept Of Trinity Describe In Buddhism? Buddhism is one of the religions that is popular for its spiritual teachings and motivation. It is based on the concept of Trinity which means three bodies. By following the perspective of the Trinity the followers will always be able to know about their Holy spirit. The Trinity Doctrine describes the existence of the Lord or God. The three perspectives of the concept of Trinity

For generations, the perspectives of the trinity have enabled us to show the religious paths to the followers. They are as follows:

It is the first concept of Trinity in which a person has to move on the path of Dharmakaya. On tracing the path a follower will be able to remove stress from everyday life. Apart from it, the development of confidence and strength will enable us to remove pain and stress effectively and permanently.

According to the conception of the Sambhogakaya, it is the position when the Lord reflects with his existence in the surroundings. It is defined as the completeness and fulfillment of Buddha’s body. The position when it defines the richness and prosperity is a part of Sambhogakaya. This concept describes their teachings, deity, and different activities of Mahayana Buddhism.

One of the ways to define the enlightenment of Lord Buddha. The body is entirely distinctive and is limitless who illuminates eighteen thousand worlds.

It is the third conception of Trinity which describes the theoretical description of a body in terms of teachings. The teachings of Buddha describe life before, after birth, and death respectively. It has no connection to the body but with the manifestations of the heavenly surroundings. It is a way to learn about the way of liberation from worldly things. 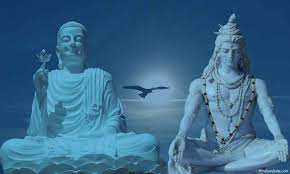 Compare Trinity between Hinduism and Buddhism

Almost all religions describe the doctrine of the Trinity. All the three Lords are Hindu that is described as the creator, maintainer, and destroyer. Brahma, Vishnu, and Maheshwara are the three Gods that are believed to lead the universe. But the main difference that persists between both religions is the way of worshipping their Lords.

Buddhism does not have many idols to worship, it is only one Lord or God whom they believe to follow. They follow the preaches of Lord Buddha who is differentiated into three kayas, known as the concept of Trinity.

Hinduism has three Lords and each is worshipped in three different forms. They are visualized in different ways as idols. The key factor of the concept of Trinity is to attain the path of truth and honesty. Removing the affection from worldly or materialistic desires. As it is always known that human develops an attachment to desire. Leading to the growth of hatred, unhappiness, stress, and anxiety.

The first Kaya of Trinity is real that can be connected to the world. But the rest two are unreal which are present to grow the sense of Dharmakaya. Sambhogakaya is responsible to describe celestial bodies while the Nirmana is described as the emancipation of Dharmakaya.

Altogether the concept of trinity in Buddhism ensures to develop the purity of the souls as a human being and follower of Lord Buddha.