Pollution free India during lockdown 2020 has put human life into quarantine to fight against the pandemic of coronavirus. On one side of the earth’s creatures, humans are in danger which dragged them to stay at home. Offices are running from home, colleges and schools are closed, public places are shut. Hanging out in bars, restaurants, hotels, and traveling all are prohibited due to the possibility of rapid transmission of the viral infection. Sudden curse to mankind has bloomed to become a boon to nature and animals.

Nature has played its magic when the Ganga river was highly polluted due to the sewers collected from different sources like bathing, washing clothes, and other human activities that have polluted the sacred river ‘Ganga’.
According to the CPCB reports a slight change in the reduction of the BOD is observed in the water of Ganges. Pollution free is the river because of the fewer sewer flowing from the industries and chemical factories that are closed in the lockdown. About 97 towns are situated at the line of the Ganga which is involved in the major involvement of pollution of wastewater.

Yamuna river without foams
Another major pollution was faced by river “Yamuna” one of the important rivers of the flowing in India. Masses of garbage industrial and factories wastage materials are collected in the river. National Green Tribunal Act has taken initiative to declare conservation zone to certain stretches of river Yamuna. It was a few days earlier that foams were floating on the river but now after the lockdown, a different picture is seen. Ministry of ‘Jal Shakti Abhiyan’ has recently described the natural beauty that was hidden after the lockdown.No foams are floating all we can see crystal and clean water flowing by you can watch the beauty of the river and sunset standing by the bank of the river

Air Pollution Decreases AQI
After all the roads are free from the vehicles nature reveals its freshness as it is pollution free. It has been observed that the present condition has been revealing about the condition of three decades. Nature is breathing as similar to twenty years ago. Generally, the AQI of the highest polluted city and capital of India Delhi stands to 200 but now the Air Quality Index has reduced to a far extent. 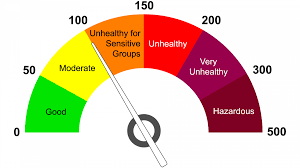 Nilgai in Noida as roads are empty and pollution-free

Nature and animals are pollution-free and happy that we can observe after the Jungle rare animal Nilgai was on the roads in Noida who used to move freely in this area almost two decades ago that was owned by farmers and landowners. While it was in Mumbai that beauty of Peacock was seen in moving around open without any fear of humans and vehicles. It was a memorable moment for people of the Khareghat Parsi Colony in Tardeo visited from the Doongerwadi forest.

Amusing scenery of the jumping dolphins was seen at the Marine Drive and Malabar hills, this is a rare scene that cannot be observed because of the busy arena.

Lockdown has created a peaceful environment, pollution free earth for nature and its creatures. As nature has reduced the harshness of pollution in the atmosphere it has provided a huge soothing environment to animals, plants, and human beings.